The Priest Gennō Meets a Fox – The Killing Stone

“Sesshōseki, or The Killing Stone” (殺生石) is a famous Noh drama from Japan. The author is unknown, possibly Hiyoshi Saami. I found a great site that has a parallel text in both English and very readable modern Japanese:

The parallel text also has a description of what masks the characters should wear and their costumes on the last page, which I thought was a nice touch. Here is a page with stills from an actual Noh performance of the play:

The play has two scenes and only four characters: a village woman, an evil fox spirit, the Buddhist priest Gennō, and a temple servant. The setting is the field, Nasuno-no-hara, which is known today as Nasu Town in Tochigi Prefecture. Here are some photos from Nasu Town for the sake of interest:

The story begins with the Buddhist high priest Gennō giving a short speech about his religious training and his trip to Kyoto for a period of seclusion. His servant observes birds falling out of the sky dead when they pass over a stone in the field, and a mysterious woman appears in order to explain the reason for the stone’s curse.

The killing stone is haunted by the ghost of Lady Tamamo, whose story the woman recites. Tamamo no Mae was a court lady in the retinue of the retired emperor Toba. She was beautiful and intelligent, well versed in the sutras, literature and music. At some point, Yin-Yang exorcist Abe no Yasunori determines that she is a fox using hei Shinto sticks and organizes a fox hunt to kill her. Tens of thousands of warriors are sent out after her when she turns back into a fox in the fashion of inu-oumono, a Kamakura era style of dog hunting. At this point, the woman talking with Gennō reveals she actually is Tamamo no Mae, and she becomes Gennō’s disciple, which ends her killing spree. 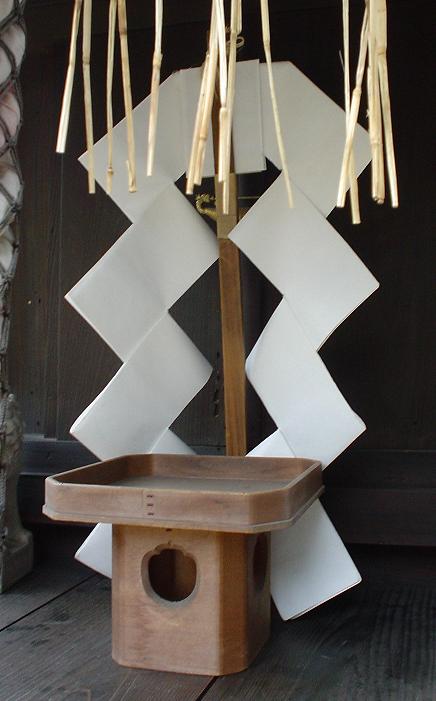 The Noh drama has a few embellishments that are interesting to note. In one place on page 8, the fox spirit admits it has caused trouble in China and India too, as the concubine Baosi and as a spirit possessing the tomb of Indian king Kalmāshapāda. I didn’t see any reference to a haunted tomb in anything I pulled up on Kalmāshapāda, though I’m no expert on India, and I’m puzzled as to why concubine Baosi would be mentioned when Chinese legend is clear that Daji was actually the bloodthirsty concubine who was believed to be possessed by a fox. Perhaps these stories were transmitted in a different form to Japan that made a fox connection, but looking at the sources, I don’t see it.

Another interesting detail is a line of a poem from some work called the Hakushi Monjū that is quite beautiful: “Owls line and cry on the branches of pine and cinnamon trees. Foxes hide in the flowers of orchid and chrysanthemums.” This line is used to describe the setting of the play.

The play is one important literary reference to the figure of Tamamo no Mae, though it’s hard not to notice as we survey the literature on foxes in the whole of East Asia that talented and influential women are typically accused of being foxes, those accused are rarely men. Chinese Zhou Dynasty concubine Daji is so far unusual in how negative these characters can be; she is the pinnacle of evil in the genre. More often than not, they are accused of much more subtle, perhaps even unrelated, calamities. I probably should cover Daji since this year’s blog theme is foxes, but I don’t have time right now to tackle the complete historical novel that she appears in, so perhaps I’ll schedule that one for next year sometime.

I see that the website with all of the cool Noh masks has one made especially for Tamamo no Mae:

Lady Xiansa is a writer, linguist, artist, and dancer. She has been a core volunteer for the Silk Screen Asian Arts Organization from 2007 to 2018 and has provided content for Pitt JCS anime events since 2011. She has taught both ESL and Beginning Korean. Her gothic horror novel, The Haunting at Ice Pine Peak, won the Bronze Award for Young Adult Fiction E-book in the 2016 Moonbeam Children's Book Awards and earned the 2018 Story Monsters Approved Seal in the Tween Category.
View all posts by Lady Xiansa →
This entry was posted in Japan, Literati Corner and tagged Bilingual Edition, Buddhism, Drama, Literati Corner, Shinto, Traditional Japanese Literature, Translation. Bookmark the permalink.