This is the conclusion of our short Christmas series on Chinese poetry with Alfreda Murck’s Poetry and Painting in Song China: The Subtle Art of Dissent and The Treasury of Chinese Love Poems: In English and Chinese, translated and edited by Qiu Xiaolong.

First, we’ll finish up the love poetry collection with a few samples. These two poems in the Qiu collection were written just before the start of the Yuan Dynasty:

Listen to the Rain

Now I listen to the rain
Under a temple’s eaves, my hair starred
In silver. People meet
In joy, part in grief,
But what do I care?
Let the rain drip onto the steps,
drop after drop till dawn.
(A poem by Jiang Jie [circa 1250 AD], Qiu, p. 157)

The imagery of this poem makes a reference to things that may not be obvious to a Western reader. Red candles are popular even today at Chinese weddings and are sold all over the web for such occasions. From the Merck book, wild geese in poetry can be symbols of exile, homelessness or loneliness. The mention of the temple in old age could refer to retiring from the world to live as a Buddhist monk or nun after a certain age, which was popular among kings and often forced upon royal concubines upon the death of the ruler. So this poem is maybe less about love than about the stages of someone’s life.

These next two love poems have a very timeless feel in my opinion:

You and I are so crazy
About each other,
As hot as a potter’s fire.
Out of the same chunk
Of clay, shape a you,
Shape a me. Crush us
Both into clay again, mix
It with water, reshape
A you, reshape a me.
So, I have you in my body,
And you’ll have me forever in yours, too.
(A poem by Guan Daosheng [circa 1250 AD], Qiu, p 161)

It is not just a day or a night that I have missed you, Lord.
It is like a broken pair
Of Bingzhou scissors –
One blade is far in the south, and the other, far in the north.
When can the pair
Be joined to cut out a wedding gown?
(A poem by Song Lian [circa 1300 AD], Qiu, p. 165)

Here is the poem in Merck’s book that I grabbed my post title from:

Would you please explain: Incessantly attending morning audience –
How can that compare to the security of drunken sleep?
Who says proceeding thus I won’t succeed?
I sense that with quiet sitting, I can get stronger;
Mist and rain have corroded my silver seal of office,
But through its fragrance, the Secretariat retains its beauty;
To purple phoenix, near and far do not exist,
A brown sparrow only flutters about;
Being a stupid student, I strayed from following the crowd,
But you brilliant lords should each strive diligently;
May your glorious reputations flank the length of the palace,
And may you soon reach the orbit of the stars….
(Excerpt from Section 8 of the poem by Du Fu [712-770 AD], Merck p. 269-70)

Tang Dynasty poet Du Fu is considered one of the greatest Chinese poets of all time, and he was one of the early examples of talented exiled officials who set the tone for this sort of poetry.

Wind in the Pines Hall

Next to a mountain was raised a hall that surveys a level stream,
Late at night Sieve and Dipper stick between the rafters;
I came and named it, the meaning is appropriate.
Ancient pines of gigantic stature, hundreds of years old,
Those spared the woodcutter’s ax today reach to heaven.
The wind sounds on Queen Wa’s fifty strings,
To wash ears you don’t need Bodhisattva Spring.
(Excerpt from a poem by Huang Tingjian [1045-1105 AD], Merck p. 168)

Merck goes into a very deep line by line analysis of this poem, and Huang Tingjian named it after a monastery where his friend Su Shi had stayed during his exile. Huang Tingjian himself was implicated in the Crow Terrace Poetry Trial, and he was known for his wildly individualistic calligraphy as well as his poetry. I thought it was interesting to find a reference that fits my blogger name Xiansa: to anyone who can read Chinese and noticed my new name chop gravatar, my pen name was not inspired by this poem but by a Japanese music anime (“La Corda d’Oro Primo Passo” to be exact) and is quite a bit more neutral in my own usage, though here the reference is to the goddess Su Nu’s musical instrument that produced supernaturally sad music according to Murck! 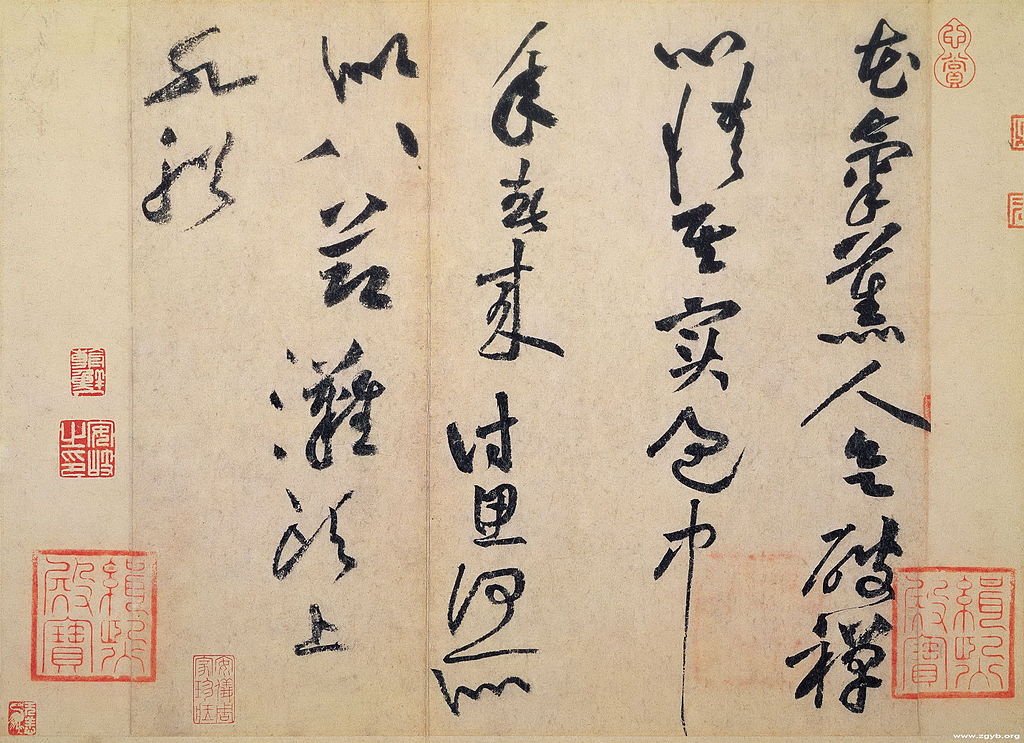 Fragrance of oranges everywhere, green and yellow coming out,
At sunset mooring a boat at a bramble gate;
Lapping waves love the moon like a handsome woman,
Boasts as if playing with beauty;
Deep night the Starry River completely without clouds,
High winds beat water into white confusion;
At the fifth night watch, someone plays a painted bugle.
Throwing on clothes, I rise to look: below is a golden basin.
(A poem by Zen monk Juefan Huihong, 12th century, Murck, P.283)

Juefan Huihong was a Buddhist monk who had gotten in trouble often with the authorities for various minor crimes and was exiled in various places. Murck suggests that in tough political climates would be scholars who were too poor to continue their studies without any court patronage would have the option of becoming a monk (p. 204). Huihong met the circle of literati exiled in XiaoXiang and shared some of their views and artistic styles.

An interesting detail to note about this time period is that a few emperors died in the span of the Crow Terrace Poetry Trial exiles’ lifetimes, and when Emperor Huizong took the throne, both the arts and official corruption flourished. He founded a formal painting school that set official painting guidelines and proper painting subjects over and against the literati landscape style with the encoding Murck uncovers:

[Painting] Examinations could screen out inferior technique and inappropriate style. They could identify painters whose independence of mind might pose problems. (Murck p.192)

Huizong’s reign was ultimately cut short as the state of Jin invaded the capital and the royal household was held captive, demoted and deported in 1127 AD.

A poem and painting by Huizong

Murck’s book in particular has a great amount of interesting detail for readers who would like to investigate these poems further.

Next time: we start off the new year by returning to South Korea with Kyungsook Shin’s epic historical romance, Jin Lee! I have a lot of great stuff planned for our 2015 reading list, including detective fiction, martial arts, horror, and foxes!

Lady Xiansa is a writer, linguist, artist, and dancer. She has been a core volunteer for the Silk Screen Asian Arts Organization from 2007 to 2018 and has provided content for Pitt JCS anime events since 2011. She has taught both ESL and Beginning Korean. Her gothic horror novel, The Haunting at Ice Pine Peak, won the Bronze Award for Young Adult Fiction E-book in the 2016 Moonbeam Children's Book Awards and earned the 2018 Story Monsters Approved Seal in the Tween Category.
View all posts by Lady Xiansa →
This entry was posted in China and tagged Buddhism, Chinese History, Poetry, Romance, Traditional Chinese Literature, Translation. Bookmark the permalink.

1 Response to Mist and Rain Have Corroded My Silver Seal of Office – Chinese Poetry & Painting, Part 2