It seems like it is not widely available, but there are still a few copies floating around.

The other book we will look at is Poetry and Painting in Song China: The Subtle Art of Dissent, by Alfreda Murck published in 2000, which can be purchased here:

Of course, the Christmas season in East Asia is the time for love, so it’s a good time to get into some traditional poetry with a romantic angle. The first book, the one by Qiu Xiaolong, has the original Chinese side by side with the English translation. Many of the eighty poems collected in the Qiu edition are from the Tang and most are written by men. However, I will focus on later poets since this is the period covered by the second book we’ll be looking at.

Immaculate as white jade, as crystal ice,
Your body lies cool, sweatless, in the water palace
Full of the subtle fragrance
Brought in by a breeze.
The curtain pulled aside,
A speck of the bright moon peeps in
To find you sleepless, your hair
Disheveled, a hairpin
Dropped against the pillow.

Taking your slender hand, we rise
To stand in the silent courtyard.
Occasionally, a stray star is seen shooting
Across the Milky Way.
“How advanced is the night?”
“The night watchman has struck the third watch.”
Golden waves of the moonlight fading,
A jade handle of the Dipper lowering,
We calculate with our fingers
When the west wind will come,
Unaware of time flowing away like a river in the dark.
(A poem by Su Shi [1036-1102 AD], Qiu, pp. 129-130)

We’ll be talking about Su Shi more in a moment. This striking poem is from the Jin Dynasty:

How often did the moon of old
Illuminate me playing a bamboo flute
Under a plum tree?
I would wake her, a beauty of jade,
To pluck a blossoming sprig
In spite of the chilly air.

Now no longer young, forgetting
About the spring breeze flowing
Out of my brush pen,
I wonder how the cold fragrance,
Coming from the sparse petals, beyond the bamboo groove,
Disturbs the wine in my cup.

The south of Yangtze lies in solitude.
The branches weighed down
By the night’s snow, I try to break a sprig,
In vain, for the one now far, far away.
The clear liquor seems to be sobbing
In an emerald goblet, the red blossoms
Silent, yet stubborn in my memory.
Long I remember where we stood, hand in hand,
Viewing thousands of trees reflecting
On the cold green West Lake.
All are soon blown out of sight,
Petals after petals.
When can I see her again?
(A poem by Jiang Kui [1155-1221 AD], Qiu, pp. 153-155)

The second book by Murck is a large book dense with historical and artistic detail, linking Song Dynasty landscape painting to poetry as a means for officials to vent frustrations with their societies. She gives this background in her introduction:

Throughout the history of imperial China, the educated elite used various means to criticize government policy and action. Censors, whose institutional function was to criticize the performance of the ruler and high officials, forth-rightly denounced policy and conduct they thought unwise or foolhardy, often at the cost of their lives. Other officials risked punishments ranging from demotion to exile to execution by commenting on the emperor’s decisions. Others chose to follow a long tradition of implied criticism by electing not to serve governments that they regarded as evil or inept. Literary compositions, including poetry, provided many time-honored modes for discreet remonstrance and criticism. In the eleventh century, during the Song Dynasty…some members of the educated elite explored an elegant and subtle means of dissent – painting….

Perfectly suited to these circumstances was the genre of verse that the historian Suma Qian…termed the ‘poetry of complaint.’ In his opinion, many of the greatest works of literature had been written by men in distress, in prison, or in disgrace. Such poetry, which spoke of dashed hopes and wasted talent, was composed in all regions of the empire, but nowhere did it flourish so brilliantly as in the south, the dreaded place of exile for disgraced officials during much of the first millennium AD….Having lost favor with his king, Qu Yuan was exiled to the southern reaches of Chu, which came to be known as XiaoXiang…The prevalence of malaria led many to consider banishment to XiaoXiang a death sentence. (Murck pp. 1-3)

Murck does talk at length in this book about poet Su Shi whose sample poem is the first in this post. 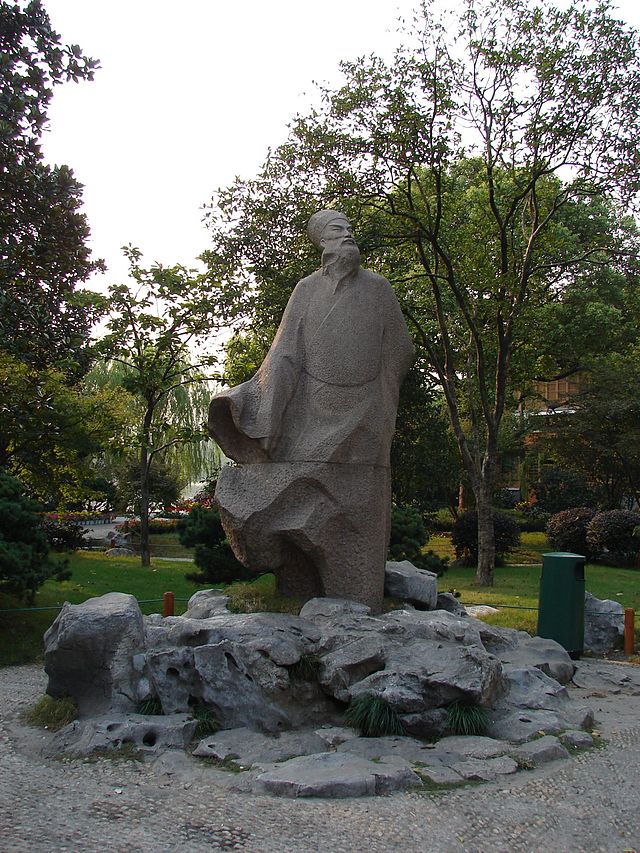 These books cover a great many poets, so I will only highlight a few in this series. Su Shi is a significant figure in the Song Dynasty worth pausing to discuss. Su Shi and his brother were leading lights of the day, the sons of a capable scholar in Sichuan who never passed his civil service exam. The Su brothers passed their exams in 1057 AD with Su Shi getting very rare outstanding marks. His examination essays were highly regarded and widely read (Murck p. 31).

Murck explains that later in his career, Su Shi became embroiled in an important case known as the Crow Terrace Poetry Trial (烏臺詩案). Su Shi was arrested in 1079 AD for sedition after compilations of his poetry expressing criticisms of the Emperor and his policies were widely circulated and came to the attention of the authorities. His initial sentence was to be executed by beheading, though his broad popularity brought some defenders in high places who had his sentence reduced to exile for an ultimately unspecified amount of time. His trial and punishment put other exiles on notice to be more cautious in their artistic criticisms of the Emperor, which included developing subtle criticism through painting.

This serves as an introduction to the main thesis of Murck’s book, mainly the later development of a connection between dissenting poetry of the literati and the hidden meanings in literati landscape paintings. Some of the poems Su Shi wrote with other disgraced friends while in exile were connected to some of these landscape paintings in often complex, roundabout ways, such as writing a poem about someone else’s poem about a landscape painting. Here is an excerpt of a poem that was not that circumspect, one that Su Shi wrote about a painting he himself viewed:

On the river, anxious mind, a thousand layered mountains,
Patches of green float in space like clouds and mist;
Are they mountains? Are they clouds? Too far to tell;
When mist parts and clouds scatter, the mountains are just as always;
We only see two rugged green cliffs shading a deep valley,
In it hundreds of springs cascade in waterfalls,
Winding through woods, wrapping around rocks, lost and seen again…
How could Wuling be only for immortals?
River and mountains are pure and empty: I am in the dust,
Although roads lead there, it is not my fate to follow them;
Returning your painting, I sigh three times,
Friends of the mountains should summon me with poems of return.
(A poem by Su Shi, Merck pp. 130-1)

I’m not going to get into the painting details too much since that is not the focus of this series, but her book goes very deeply into an investigation of literati poems. I have to say that some of the poems she gives as examples are perhaps too packed with names of other officials known to the authors and readers of the time that would not mean anything to a wider readership centuries later. Ill’ stick to the ones that she quotes that are more accessible. There’s so much more here in her book that even two blog posts could never do it justice.

See the link in the column to the right on my affiliate blog, the Sun Rises in the East, to check out more on translator Qiu’s career.

Part one of a two part series.

Lady Xiansa is a writer, linguist, artist, and dancer. She has been a core volunteer for the Silk Screen Asian Arts Organization from 2007 to 2018 and has provided content for Pitt JCS anime events since 2011. She has taught both ESL and Beginning Korean. Her gothic horror novel, The Haunting at Ice Pine Peak, won the Bronze Award for Young Adult Fiction E-book in the 2016 Moonbeam Children's Book Awards and earned the 2018 Story Monsters Approved Seal in the Tween Category.
View all posts by Lady Xiansa →
This entry was posted in China and tagged Chinese History, Poetry, Romance, Traditional Chinese Literature, Translation. Bookmark the permalink.