Singing Soldiers and the Opera Guild – The Scholars, Part 4

Starting with chapter 24, The Scholars shifts gears and turns to describe the Ming capital city of Nanking. We are introduced to actor Wen-ching Pao and the situation of opera guilds in the city. During the Ming Dynasty, Nanking was part of or very near to the Wuyue region of the country, and the dominant opera style of the time was called kunqu [Wikipedia]. Here is the website for a modern kunqu opera company based in Maryland that has lots of information on this style of performance, including videos and audio recordings:

Wen-ching Pao was part of an opera guild and acting family, which was a strict world and was considered to be very low-class in society. Much of his occupational concern revolves around his instruments and costumes, and he plans on recruiting his own opera company players. He hires a broke scholar, Mr. Ni, to repair his musical instruments, then offers to adopt his youngest son when he hears Mr. Ni had to sell four of his other sons because of their poverty. This is where we see the class differences start to emerge as Wen-ching Pao decides against training his adopted only son in the family opera business.

However, in spite of his low class, in chapter 25, the novel reveals Wen-ching Pao’s sterling character in his response to a request from some corrupt officials to use his influence with Prefect Hsiang to affect the outcome of some court cases:

Pao Wen-ching laughed. “The prefect once offered me five hundred taels at Antung,” he said. “If I were so fond of silver, I should not have declined it as I did. But I dared not accept it. I know that I’m destined to be poor and to live by the sweat of my brow. How can I take this money behind the prefect’s back? Besides, if a man had right on his side, he would never try to bribe other people with several hundred taels; and if my request were heard it would be unfair to the other side — that would count against me when I settle my accounts in the next life. I don’t dare do such a thing, and I hope you two gentlemen won’t do anything of the kind either. The proverb says: The yamen is a good place to do good deeds. You are in the prefect’s service and you mustn’t spoil his reputation nor risk losing your own property and lives.”

Such talk sent chills up the two clerks’ spines, and they changed the subject to hide their discomfiture. (The Scholars, Chapter 25)

Chapter 30 has a particularly relevant passage describing an acting contest arranged by one of the noblemen, Shen-ching Tu. The climax of the scene has many of the pleasant details readers should by now be familiar with as characterizing Jingzi Wu’s style:

Soon the feast was served, and music sounded as the first actor ascended the stage. One acted “The Feast,” another “The Drunken Singer,” yet others “Borrowing Tea” or “Killing the Tiger.” No two scenes were the same. Wang Liu-ko presented “The Nun Longs For Earthly Pleasures.” When night fell hundreds of lamps were lit, high and low, making everything as bright as day. And the melodious singing lingered in the air. Rich yamen officials, merchants and shop-keepers in the city, hearing of the contest, hired fishing boats, fixed up awnings and hung up lanterns, then had themselves rowed to the middle of the lake to watch. When they were pleased, they applauded and cheered. This went on till dawn, by which time the city gates were open and they went home. (The Scholars, Chapter 30)

Let’s look again at another restriction from 王利器的«元明清三代禁毁小说戏曲史料» ( Historical Data on the Yuan, Ming and Qing’s Forbidden and Destroyed Novels and Chinese Operas, compiled by Liqi Wang [1911-1998]). This time we will pick up the motifs from this section of the novel on flute playing and opera:

The Third Month of Hongwu’s 22nd Year [1390 AD]: A Prohibition on Military Officials and Soldiers Learning to Sing (Ming Dynasty)

On the twenty-fifth day of the third month of Hongwu’s 22nd year [1390 AD], we present this imperial edict: “There are still military officials and soldiers in the capital who cut their tongues learning to sing, who break their hands playing chess and shuanglu [an ancient type of Chinese chess using dice], who skin their legs playing cuyuan [an ancient form of Chinese football], who were sent into banishment far away to conduct business.” The prefectural army guards a thousand houses, but Rang Yu and Duan Yu caused them to disobey by playing the pipes and singing songs, and they cut their upper lips and the tips of their noses. Also, Jiangwei Long commanded Yong Fu to take part in playing cuyuan with this small banner unit’s Yanbao Yao, he skinned his right leg, and the whole family was sent out to visit Yunnan Province. (The Ming Qiyuan Gu, A Guest’s Superfluous Words, Scroll Ten, The Nation’s First Announcement) [p.12, my translation] 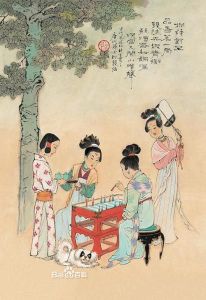 In this section of the novel through about chapter 39, there are more off-handed encounters with author Jingzi Wu’s themes. We see more contrasts between honest and corrupt scholars, this time with many descriptions of men of integrity in addition to the moment described above with Wen-ching Pao. Some of these upright characters include Mr. Lou in chapter 31, who was the scrupulously honest steward of the Prefect of Kanchow and therefore had remained poor. In chapter 34, Shao-ching Tu is considered a wastrel for his sincere interest in “fostering filial piety and brotherly love,” because those discussing him believe one should just write exam essays about such things rather than live them. In chapter 38, honest Magistrate Yiu goes out of his way to see that a widow from another province who only spoke a different dialect returned to her home safely.

This contrast is important for reasons well beyond conditions during Jingzi Wu’s lifetime. Currently, China has been pushing an anti-corruption campaign under the new leadership against bribery and corruption generally, as well as lavish banquets and gifts, wasting of food and other ostentatious displays, to the point of even trimming the New Year’s gala show that the Chinese people are accustomed to. So this is a very timely message.

Other familiar themes that come up include references to the controversies over the exam form, or the paku essay exam versus poetry, such as in chapter 36 between Dr. Yu and Shu Wu. In that same chapter, we see another situation where Dr. Yu finally passes his metropolitan exam at age 50 along with many other men in his age group and older. In chapter 35, when talented scholar Shao-kuang Chuang is summoned to serve the Emperor, he prays and divines that he should become “a hermit in the mountain,” which leads him to ask for permission to return home. This echoes the picture of ideal scholar Mian Wang in chapter 1.

Finally, chapter 35 reveals a key conflict that has not come up at all but that we have been looking at in select laws governing the arts in the Ming and Qing Dynasties since Jingzi Wu lived in the Qing and set his novel in the Ming. Here, Shao-kuang Chuang meets Hsin-hou Lu who reads books written by a banned author, and Chuang advises him to stop reading banned books altogether so he won’t get in trouble, even though technically the author in question did nothing wrong other than get on Emperor Hongwu’s bad side. Later guards storm Chuang’s residence at Lotus Lake to arrest Lu after an informant tipped them off that someone there with a military background had been reading banned books, and Lu turns himself in. As usual, Jingzu Wu’s concerns stay nicely in the background.

This section of the novel includes many beautiful descriptions, such as Nanking in chapter 24, Lotus Lake in chapter 35, the grand ceremony at the founding of Tai Po Temple in chapter 37, and tiger attacks and other strange beasts that appear on a mountain trail near Ocean Moon Monastery in chapter 38.

The cast of characters is ever-expanding, but the story does come full circle as earlier figures reappear briefly at gatherings. Next time, we will finish our study of this novel and make some final conclusions.

Lady Xiansa is a writer, linguist, artist, and dancer. She has been a core volunteer for the Silk Screen Asian Arts Organization from 2007 to 2018 and has provided content for Pitt JCS anime events since 2011. She has taught both ESL and Beginning Korean. Her gothic horror novel, The Haunting at Ice Pine Peak, won the Bronze Award for Young Adult Fiction E-book in the 2016 Moonbeam Children's Book Awards and earned the 2018 Story Monsters Approved Seal in the Tween Category.
View all posts by Lady Xiansa →
This entry was posted in China and tagged Chinese History, Traditional Chinese Literature, Translation Sample. Bookmark the permalink.